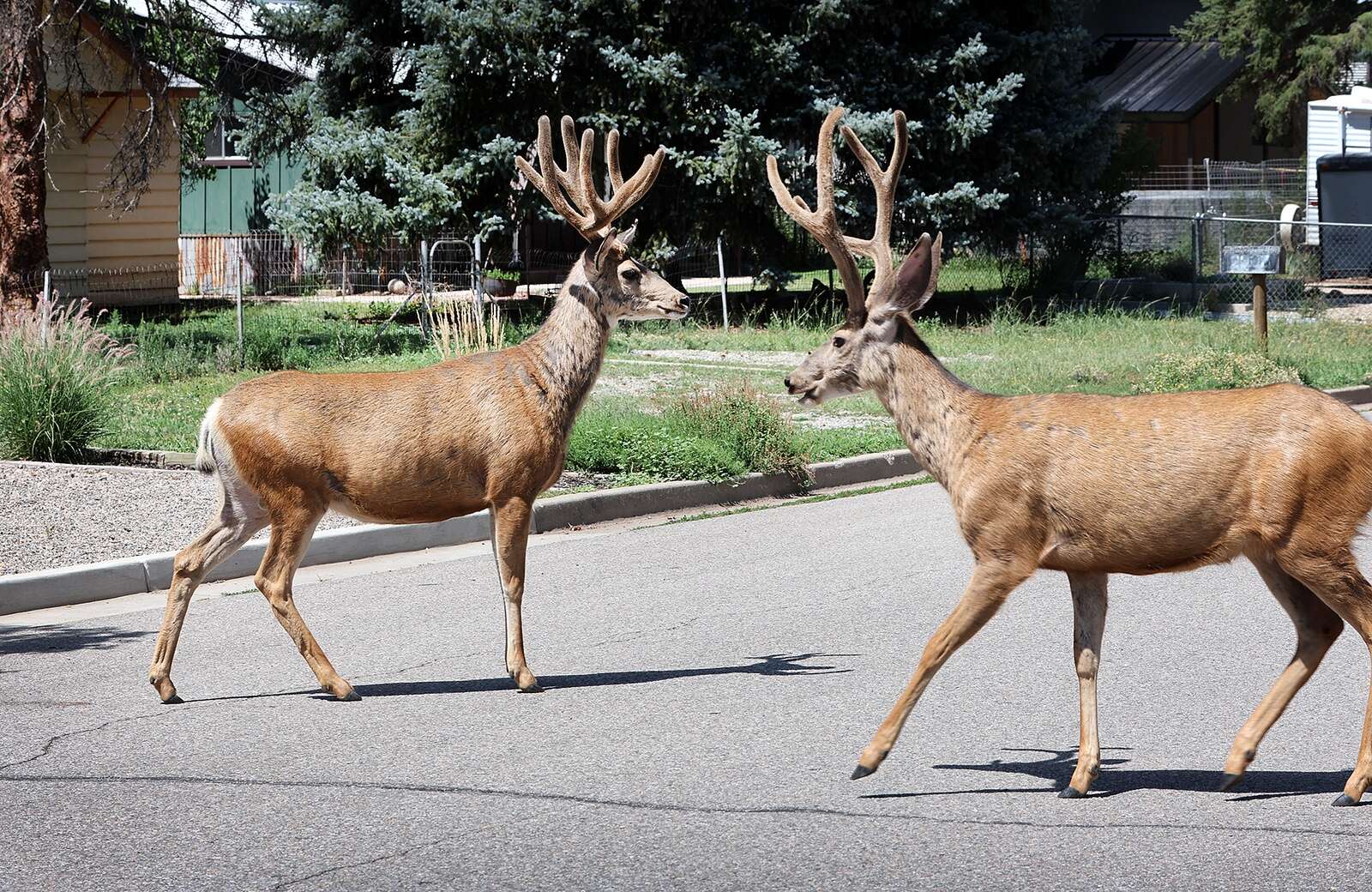 Mule deer search for food near 32nd Street and E. Fourth Avenue in August. During the 1960s and 1970s, western Colorado’s mule deer population was strong, but it has since declined significantly. The Uncompahgre deer population near Montrose dropped from 60,000 in the 80s to about 10,000 today. (Jerry McBride/Durango Herald)

Don’t be fooled by Durango fauna: Most deer aren’t fond of people

Living among wildlife and witnessing animals in their natural habitat is part of what attracts residents and visitors to Southwest Colorado. But it tends to be a one-way attraction: Birds of prey and hoofed animals are, for the most part, driven away by human presence.

That may come as a surprise to some Durango-area residents who see plenty of hoofed animals on their walks, drives and bicycle rides around town. They graze on the sides of roads, roam through neighborhoods and trod into traffic.

While these town deer may give the impression they are used to human presence, they aren’t representative of the larger mule deer population in Southwest Colorado, which generally steers clear of people, pets, automobiles and machinery, Grigg said.

“The larger population as a whole, what we’ve seen over the last probably 30 to 40 years now is that most of our deer populations have declined over time because of human development and overall loss of habitat, whether that’s direct loss or indirect loss from human disturbance,” he said.

The mule deer herds around Durango haven’t suffered as much as those across other parts of western Colorado, he said.

Habitat disturbance forces wildlife to expend more energy, he said. Animals that share space with humans become more vigilant, ever on the lookout for human activity, which means they are spending less time foraging for food.

Human activity will drive wildlife out of the habitats they are most suited for, and then farther away, Grigg said. Animals tend to allow a “buffer zone” between humans and their living spaces.

“You end up with a lot of habitat that otherwise could be available to wildlife that just becomes sort of devoid of wildlife because they stop using those areas,” he said.

A common consequence of pushing wildlife out of their preferred habitat is they end up in less suitable environments. Fleeing humans, animals could end up in areas where there is less food available or they are more susceptible to predation.

“Or, just areas of lower habitat quality where they’re just not getting the same level of nutrition they would get in their more preferred habitats,” he said.

Elk, bighorn sheep, raptors and other birds are greatly affected by human activity in western Colorado.

“There’s a fair amount of research that’s been done on raptors and other bird species that shows negative impacts of noise pollution and just human activities,” he said.

The impacts of wildlife abandoning a habitat can be wide-ranging, including plant species no longer being grazed or a predator species running out of prey. Even people who enjoy seeing wildlife or hunting can feel the effects, he said.

Grigg said research has revealed wildlife tend to respond more to motorized activity than nonmotorized activity. Whether it’s noise pollution from vehicles on busy roads or dogs running off leash, human activity has an impact.

“But it comes (at) a cost to wildlife populations that use that same landscape,” he said. “Recreation has a big impact.”

Colorado Parks and Wildlife says on its website that motorized vehicles cause soil erosion, help noxious weeds spread across the landscape and disturb wildlife.

In the city of Durango’s quest to amend certain conservation easements to allow e-bikes on certain trails at Horse Gulch, the potential for wildlife disturbance is one of the elements to be scrutinized by La Plata Open Space Conservancy.

Amy Swarzbach, natural resources manager for Durango, said research into the effects of human recreation can be timely and costly.

Grigg referred to a study conducted in 2003-04 in Oregon and published in Forest Ecology and Management, a journal about forest sustainability.

The study consisted of various methods of recreation, such as ATV’s, horseback riding and mountain biking, applied to sections of a forest trail in order to measure how the surrounding elk population responded.

The study found that elk avoided the trail in real time during the described forms of recreation, ranging between 558 meters to 879 meters from the trail sections in use.

“Distances between elk and recreationists were highest during ATV riding, lowest and similar during hiking and horseback riding, and intermediate during mountain biking,” the study says.

Reports from across the country and around the world indicated that wildlife quickly moved into areas vacated by humans during the pandemic. Now that the pandemic has lost some of its steam and human activities more closely resemble the Before Times than a year ago, wildlife is once again retreating into the backcountry.

Grigg said Colorado Parks and Wildlife wants people to go outside, recreate and enjoy public lands and natural resources. But at the same time, it encourages cognizance of one’s impact on the landscape.

“We encourage folks to stay on trails as much as possible and not create illegal trails, or what we call user-created trails, across the landscape that further fragment habitat,” he said. “Mostly, just be aware of your disturbance level while you’re out there. Don’t create a bunch of unnecessary noise; have your dog on a leash when you’re out there.”