Durango was pounded with snow Sunday through Tuesday, accumulating 24.1 inches since Sunday morning, according to the National Weather Service.

The heavy snow led to the closure of Durango, Bayfield and Ignacio schools, iced over area roads and sent hundreds of residents to Purgatory Resort in search of fresh tracks.

Pagosa Springs received 23.1 inches of snow Sunday through Monday, while Cortez received 11 inches during the same period, according to the National Weather Service in Grand Junction. Silverton also reported 14.1 inches over course of the early week storms. 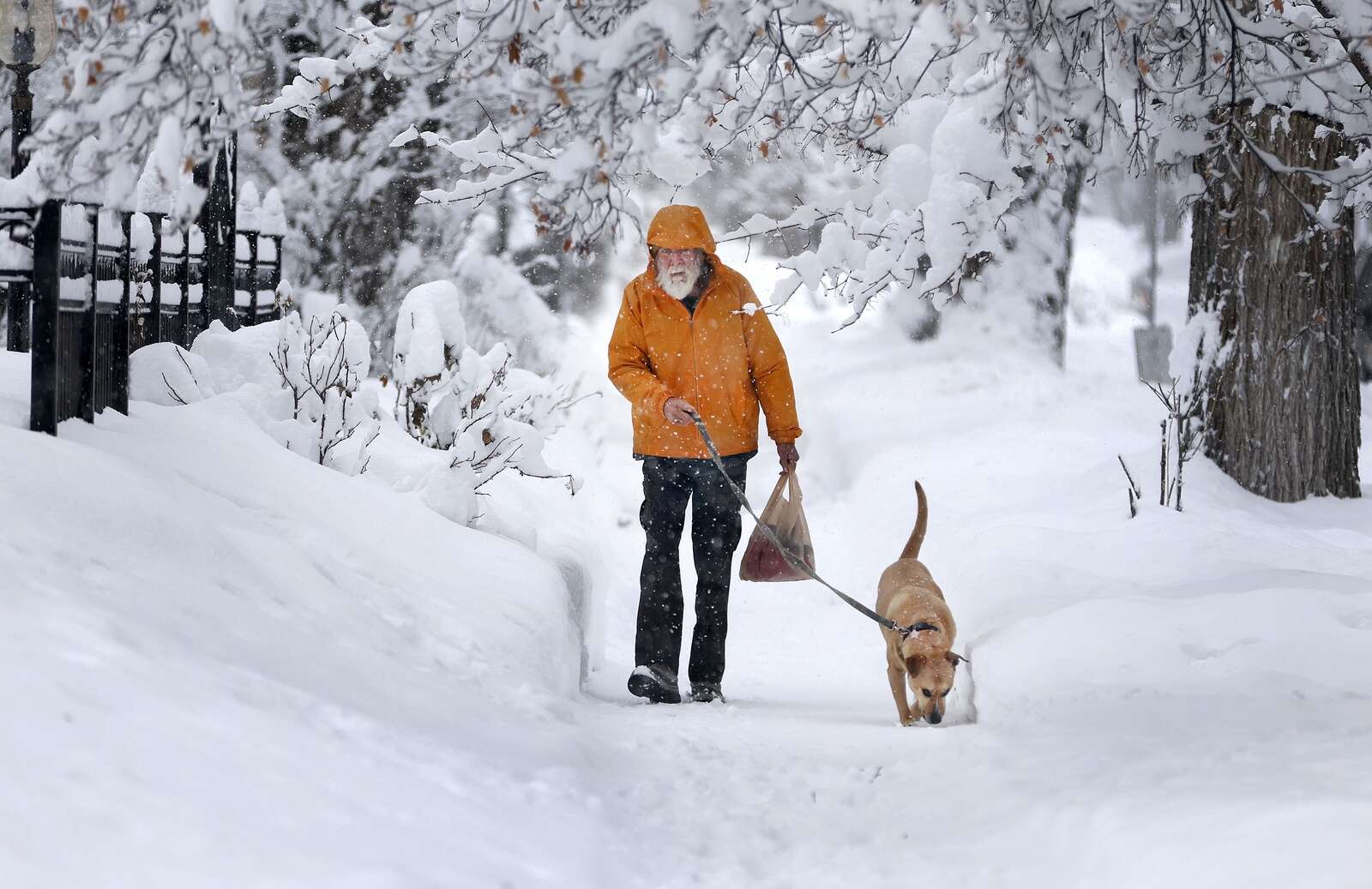 Bob Lyle walks under branches weighted with snow with his dog Kiana on Tuesday as snow falls in Durango. (Jerry McBride/Durango Herald)

“With 78 inches of snowfall so far this month and more on the way, this January at Purgatory has been one of the snowiest in recent memory,” said Purgatory spokeswoman Theresa Graven.

With all of the fresh powder, the resort reminds visitors to ski in pairs when heading into the trees and that parking lot space is limited. Illegally parked cars makes it dangerous and difficult to free up space for Purgatory staff members and visitors.

National Weather Service meteorologist David Beyers said snowfall is above-average for this time of year. The snowpack is around 130% to 170% of normal across Utah and Western Colorado, he said.

The recent storms are a result of atmospheric rivers that continue to come off the Pacific coast and bring precipitation to Southwest Colorado. Beyers said the entire state is expected to receive above-average snowfall this spring, which should improve long-term drought conditions.

La Plata County has moved out of moderate drought conditions and into abnormally dry conditions, according the U.S. Drought Monitor.

The only way the snowpack could be negatively impacted is if Southwest Colorado goes through a serious dry spell, but it appears the region may receive some snow again midweek next week.

However, it is likely next week’s storm will impact the northern Colorado mountains, which is considered north of the I-70 corridor.

The storms have also moved parts of the San Juan National Forest just north of Durango to Silverton into high avalanche danger. On Sunday, the area was rated as considerable by the Colorado Avalanche Information Center.

Storms also caused the closure of U.S. Highway 550 northbound from Purgatory Resort to Silverton because of safety concerns Tuesday. It is not known when the corridor will reopen.

The westbound lane of U.S. Highway 160 between Pass Creek Rd and the Wolf Creek Ski area parking lot was closed for part of the day Tuesday because of a stalled vehicle, but the incident was resolved as of 12:30 p.m., according to Colorado Department of Transportation’s trip map. 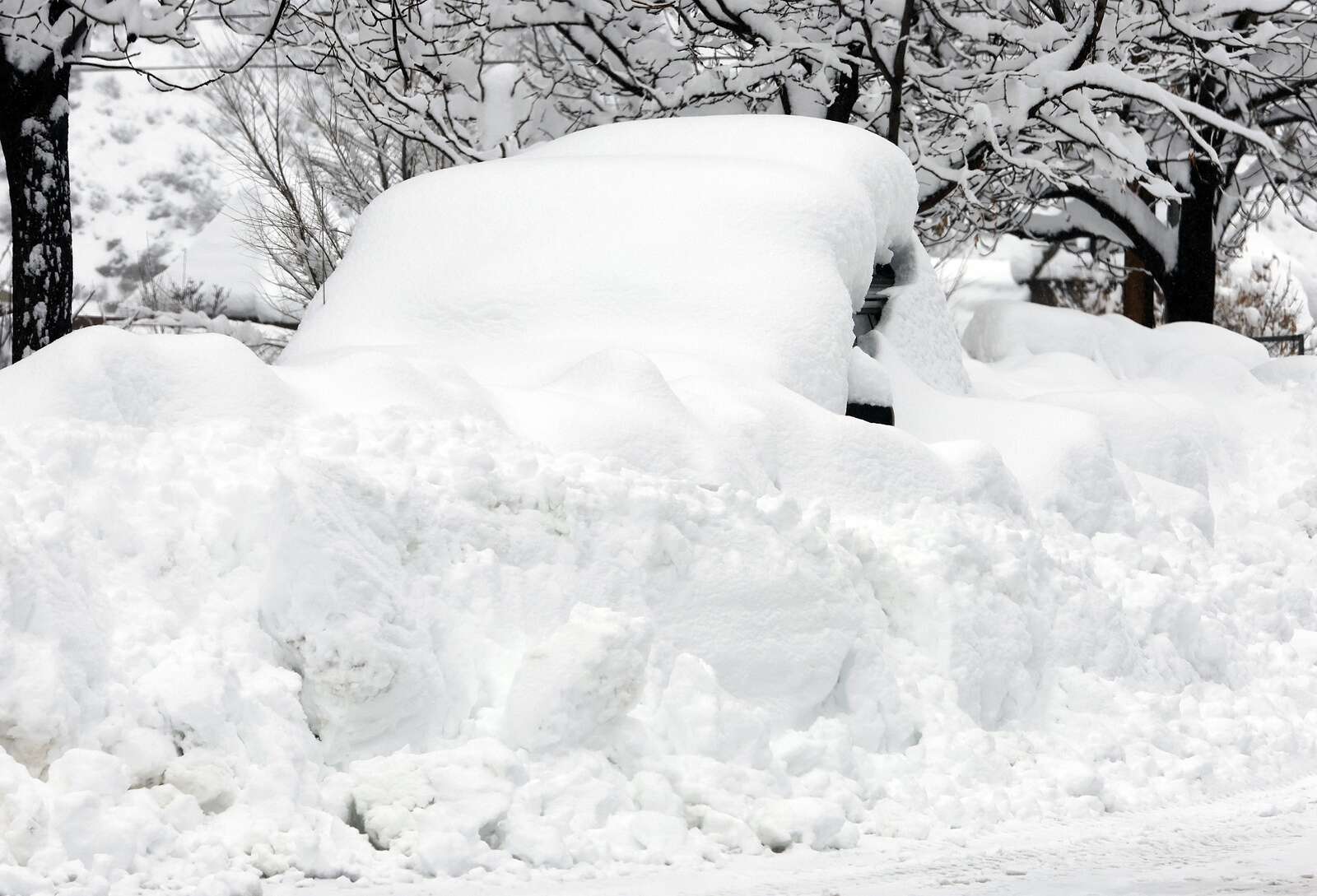 A car is buried under snow on Tuesday in Durango after the town received more than 24 inches of snow over the past three days. (Jerry McBride/Durango Herald)

Red Mountain Pass was also closed about 1 p.m. Tuesday for safety reasons; it was unknown when the pass will reopen.

“They’ve been seeing what they call slips,” said CDOT spokeswoman Lisa Schwantes. “That’s when snow begins to start sloughing off the embankments and cliffsides and we needed to close the road for motorists’ safety.”

La Plata Electric Association reported a power outage that affected six customers along County Road 202 near Hermosa Creek that started at 9:41 a.m. The outage was a result of snow hanging on or falling off power lines.

“As long as there’s snow on the lines, there’s likely going to be outages and it looks like the weather is going to be getting pretty cold,” said LPEA spokeswoman Hillary Knox.

She said if snow freezes on power lines and then melts when warmer weather comes it will cause snow to unload from the lines creating the potential for more outages.

Colorado State Patrol suggested people stay home rather than travel across the state on Wednesday because of dangerous road conditions. However, if travel is necessary, CSP recommends checking tires to make sure the tread is 3/16 of an inch deep, replace windshield wipers if needed, use all-wheel or four-wheel drive vehicles, and commercial vehicles use chains.

Vicari said the cancellations had nothing to do with conditions at Durango-La Plata County Airport and that runway crews have been able to keep the runway clear of snow.

“The vast majority of the impacts that we see with weather tend to be because of interruptions at the hub airports,” he said.

Beyers said the storms should clear up by Thursday with drier weather expected for the rest of the week.